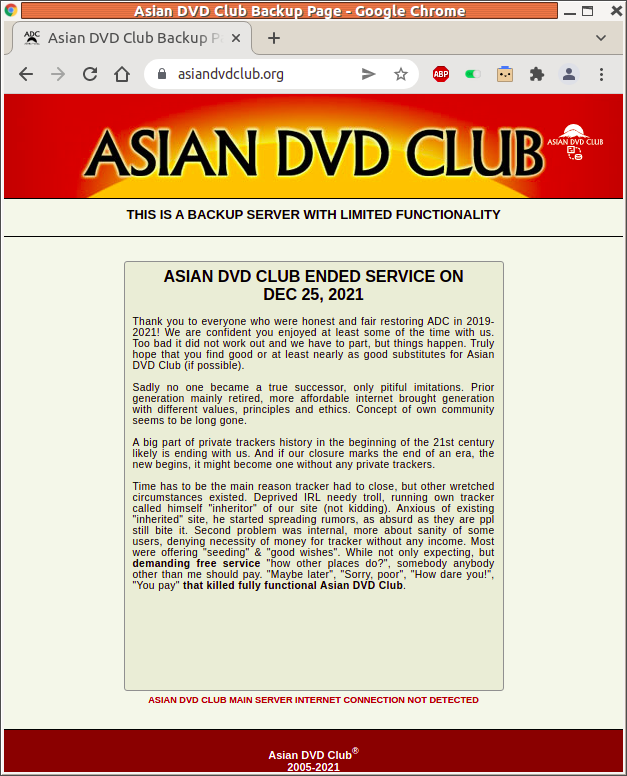 Thank you to everyone who were honest and fair restoring ADC in 2019-2021! We are confident you enjoyed at least some of the time with us. Too bad it did not work out and we have to part, but things happen. Truly hope that you find good or at least nearly as good substitutes for Asian DVD Club (if possible).

Sadly no one became a true successor, only pitiful imitations. Prior generation mainly retired, more affordable internet brought generation with different values, principles and ethics. Concept of own community seems to be long gone.

A big part of private trackers history in the beginning of the 21st century likely is ending with us. And if our closure marks the end of an era, the new begins, it might become one without any private trackers.

Time has to be the main reason tracker had to close, but other wretched circumstances existed. Deprived IRL needy troll, running own tracker called himself "inheritor" of our site (not kidding). Anxious of existing "inherited" site, he started spreading rumors, as absurd as they are ppl still bite it. Second problem was internal, more about sanity of some users, denying necessity of money for tracker without any income. Most were offering "seeding" & "good wishes". While not only expecting, but demanding free service "how other places do?", somebody anybody other than me should pay. "Maybe later", "Sorry, poor", "How dare you!", "You pay" that killed fully functional Asian DVD Club.